Life at the Bar – Boundary Disputes

Articled Clerks always get the worst jobs in the office. On my first day in the office amongst the files I was given was one very thick bundle of papers. It contained correspondence going back for about six years. Our clients owned a bungalow on the main road east out of Cleveleys, a small seaside town close to Blackpool Lancashire. The land had originally been farm land but strip development had taken place. The farmer who had sold off the plots of land had retained a strip wide enough for his farm machinery to get into his fields. But that had been many years before and his tractor was now too wide to get along the track. He maintained the owners of the bungalows on each side had planted hedges on his land which had matured and were now impeding his access. 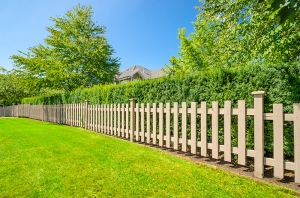 Our clients disputed this and argued that the hedges were inside the boundaries. Among the papers were copies of the plans from their conveyance. Land in east Lancashire was not registered with the Land Registry at the time. I looked carefully at the plans but they were of very little assistance. They were endorsed with the phrase, ‘This plan is for the purposes of identification only and not of delineation.’ That meant they were not to scale, and anyway the thick red pencil line would have made it difficult to measure with any accuracy.

I dreaded telephone calls from our clients, made slightly worse because the wife’s voice was that of a tenor’s and I couldn’t tell which of them I was speaking too. Fortunately, the solicitor for the farmer thought the whole thing was hilarious and, in his view, incapable of solution. ‘My client will just bulldoze his way through. They’ll want to sue for the damage to their hedge and you’ll tell them that is not a good idea. Then it will all die down until the next time. Just put the file to the bottom of the pile and tell them you’re working on it.’

I wasn’t too happy with that. I wanted to make a good impression with my principal and with the clients, although I thought the farmer’s solicitor was probably right so, despite my misgivings, I took his advice. My salvation came in the form of Trevor, a rather chubby young man, who was the new articled clerk.

He had already been given a few files to work on when he came into my room to see if I needed any help. ‘Well, there is this,’ I said, handing him the dog eared bundle.

A couple of weeks later he came into the office looking very smug. ‘I’ve solved that boundary dispute,’ he said. ‘I went round, got the farmer there, together with our clients, and we pegged out the boundary.’

It was only a couple of days later I was driving along the road and as I passed our clients bungalow, I noticed a pile of white pegs dumped on the grass verge.

Back in the office, I told Trevor, not to bother with the bill and to put the file at the bottom of the pile.