Whenever I am asked if I always wanted to be a writer, my immediate response is to say no. I didn’t aspire to be a writer but I did write. In my teens I wrote stories of unrequited love, variations on the Romeo and Juliet theme, and,with a friend, I invented scripts for a TV serial, loosely based on Emergency Ward 10 (for those of you who remember that.

Then life took over. A law degree at Sheffield was followed by articles with a firm of solicitors in Blackpool. After a couple of years fighting male chauvinism in Lancashire, I began my love affair with London. Still unrequited.

It wasn’t long before I wanted to change from being a solicitor advocate to being a barrister. I desperately wanted to address a jury. Some would say the best of my fiction was defending in the criminal courts, although representing the parties in divorce cases could be compared to a Barbara Cartland novel without the happy ending.

So for twenty five years I went to court on a daily basis, and I wrote jury speeches.

I missed working after I retired, and began to think about writing a family history. Most of my immediate family have been brought up in Florida USA, and have no idea about their English ancestry. When I was young, we all lived in the same town in the Rossendale Valley, Lancashire and my mother would talk about her relatives and our father’s. I thought it would be interesting for my two nieces to have a book which told the stories and myths about their English family.

I began writing. I was bored after the first two pages and it was my family I was writing about!!! I decided I needed help and after  meeting someone at the Ways with Words Festival, who was starting an MA at Plymouth , I applied for the MA in Creative Writing at Exeter. The tutors there encouraged me to write a crime novel/ legal mystery. Crucial Evidence was published in January 2014. I hope to publish my second ‘Reluctant Consent’ this year.

I live in Devon  overlooking the Exe estuary with my husband Alan and now our second Springer Spaniel Lily. 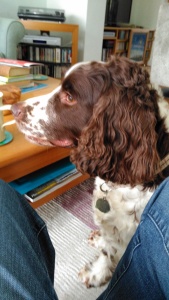