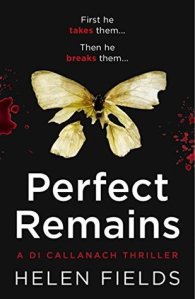 The book opens with a body being burnt on a remote Highland mountain so that all that remains are the victim’s teeth and a fragment of silk. The body is believed to be that of a successful Edinburgh female lawyer. The murder is the first investigation lead by DI Luc Callanach who has just joined Police Scotland from Interpol. When a second woman is abducted, this time a cleric in the Church of Scotland, the investigation is hampered by a criminal profiler who insists they are searching for a sex offender

The identity of the killer and his motives are known throughout the book. It is the question of whether he can be identified and caught before he kills anyone else that creates the suspense.

The character of Callanach is well developed as we learn about his background, half Scottish, half French and the reason for his leaving France and Interpol. His relationship with his fellow officers is explored with real insight, particularly that with his fellow DI Ava Turner.

It is difficult to say more about the book without giving away the turning points in the story line. I certainly enjoyed reading it.