The protagonist in my novel Crucial Evidence, Cassie Hardman walks from the Old Bailey to her chambers in Middle Temple Lane and as my novel is set in contemporary London I wanted to find out how much it had changed since the days when I took the same route.  At the beginning of my career Fleet Street was the home of the newspapers. Here journalists and lawyers rubbed shoulders in the pubs and bars, although only males if El Vinos was your drinking hole of choice. 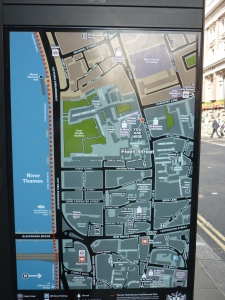 As you can see from the map along the street are some fascinating places redolent with history. I have already mentioned St Brides Church but not the Institute and Printing Library, which is attached to the church. Shoe Lane runs north and there is a library on the western side of that lane. Between Shoe Lane and Fetter Lane are a number of Courts, narrow lanes and squares of a type familiar to all who read Dickens. Dr Johnson’s House.a 300 year old town house nestles among these narrow lanes at 9 Gough Square (see http://www.drjohnsonshouse.org)  On Fleet Street is the public house with which the Dr is associated ‘The Cheshire Cheese.’

On the same side of the road is the building that was occupied by the Express group of newspapers. The curve of black glass a contrast to the shop fronts next to it. It is difficult to tell what the building is used for now. I noticed a number of serviced offices being advertised. One of the old Inns of Court, Sergeants Inn has become a hotel. The photograph shows it with the ground floor hidden by the red London bus. 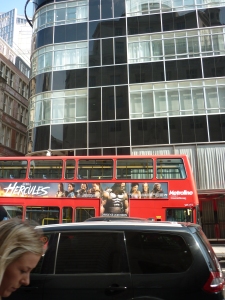 Some things remain the same, the signs outside the public houses, but there are now banks, coffee shops and the small stores the supermarkets have reinvented rather than the offices of newspapers. The Church on the right in the photograph of the map is St Dunstan’s in the West.

St Dunstan-in-the-West was a well-known landmark in previous centuries because of its magnificent clock. This dates from 1671, and was the first public clock in London to have a minute hand. The figures of the two giants strike the hours and quarters, and turn their heads. There are numerous literary references to the clock, including in Tom Brown’s Schooldays, the Vicar of Wakefield and a poem by William Cowper (1782):

When labour and when dullness, club in hand,
Like the two figures at St. Dunstan’s stand,
Beating alternately in measured time
The clockwork tintinnabulum of rhyme,
Exact and regular the sounds will be,
But such mere quarter-strokes are not for me.

The courtyard also contains statues of King Lud, the mythical sovereign, and his sons and Queen Elizabeth I, all of which originally stood in Ludgate. The statue of Queen Elizabeth I dates from 1586 and is the only one known to have been carved during her reign.  Taken from the website http://www.stdunstansinthewest.org  Here too there has been change as the church now caters to the Romanian community in the city. 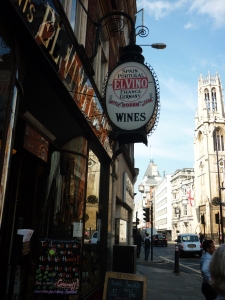 El Vino’s was of course the inspiration for Pomeroys Wine Bar beloved of Rumpole in John Mortimer’s books.

One of the other changes I noticed was that the vehicles using the street were mainly the buses, taxis and the little white van. Private cars pushed out by the congestion charge no doubt. Parking was always a nightmare, very expensive and difficult to find a space.

One response to “Fleet Street London”