As the experts on the Antiques Road Show examine an item they always ask what the owner knows about the piece. I have a print I acquired some years ago whose provenance is a little risqué.  It’s a lithograph by the artist John Ward and I bought it from the manageress of the club where I played squash. She was a dark haired, dark eyed woman who not only managed all the bookings at the club, but also ran the bar. It was a very social place and I often stayed on after a game to gossip with the staff and other players. It was also a favourite watering hole for police officers from the local CID.

The manageress produced the picture and asked me if I was interested in purchasing it for quite a modest sum. I recognised it as one of the  Inns of Court and asked her how she had come by it. I was particularly concerned because the price she was asking was very low and I thought it might have been stolen. There were some shady characters drinking in the club. She reassured me that it was not stolen with the riposte that she wouldn’t have produced in front of a group of detectives who were drinking in the bar that night.. I could see the logic of her comment. ‘So’, I said, ‘How did you come by it?’

She told me that her then boyfriend was the manager of an ‘adult only’ club in Soho and some months before, there had been a police raid when the club was full. The clients had all made a hasty exit through the fire doors without stopping to collect any of the items they had left in the cloakroom. Over time most of the property had been collected, but the club had been left with a collection of umbrellas and this print. When the boyfriend was given the task of disposing of the picture he thought I might like it, as he knew I was a barrister.

I decided in the circumstances it was not the proceeds of a theft  and I would not be charged with handling stolen property. so I purchased the print. 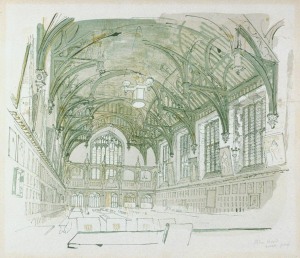 For many years it hung in my office in Chambers and now is in my home;  it continues to  give me great pleasure. It shows the hall of Grays Inn, the Inn of which I am a member, as incidentally is the protagonist in my novel Crucial Evidence. The lithograph also makes me smile as I think it was left in that Soho club by some eminent judge too embarrassed to reclaim his piece of art.