I recent trip to Buckland Abbey,  the home of Sir Francis Drake, left me asking about the nature of experts and just how qualified they really are to offer their opinions. The National Trust, who own Buckland Abbey inherited the painting as one of a group of five from the estate of the late Lady Samuel of Wych Cross.  The portrait is clearly that of Rembrandt, his features are instantly recognisable, but it was thought that it was by one of his pupils, such as Govaert Flinck, rather than

by the master himself. I assume that attribution was made by experts in the field. 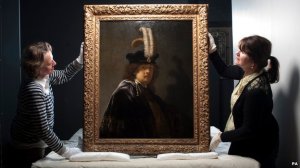 However further inspection by the Rembrandt expert and former chair of the Rembrandt Research project led to the NT allowing the painting to be subject by the Hamilton Kerr Institute. They used the latest scientific techniques to establish the painting was contemporary with the artist, and the panel was made of a wood available to him, as well as the paint comprising pigments he worked with. But does that point to anything more than the portrait coming from the studio of Rembrandt. Further work on the painting involved taking it out of its frame and careful cleaning allowed the expert, Professor Ernst van de Wetering to examine it closely. He now says and no one is disagreeing with him that he believes the painting is by the master. What has changed. Certainly cleaning has enhanced the painting. The use of light coming over the shoulder is skilful. Shadows concentrate the viewer’s gaze onto the eyes of the subject, and they look out at the observer with real intelligence. The velvet cloak looks as if it would be so soft to touch. But why didn’t previous examination of the painting see the quality of the work? Surely experts would know the effect the process of ageing would have on any painting, wouldn’t they? I don’t understand why the change of heart in less than four years. Still it is a wonderful portrait whoever painted it, and well worth the visit to Buckland Abbey.