Life at the Bar-Desperate Wives

Not many people have heard three women admit to attempts on their husband’s lives in the course of one afternoon, but this is what happened to me. It all began when I went to a seaside town to appear in the County Court seeking an injunction for a young woman to prevent her partner harassing her. The long, high hall that ran the length of the courthouse was heaving. There were young men waiting to be called: some alone, others in groups or with teenage girls clinging to them. A few children ran around in ignorance of the nature of the building. Dark suited solicitors, carrying large files, moved amongst the crowd, marshalling their clients, and bewigged barristers tried to take last minute instructions above the chatter and the sound of shuffling feet. 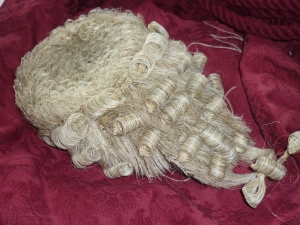 I threaded my way through the clusters of people until I found my client, Sharon Hurst, a young looking nineteen year old with long, wispy, blonde hair. There were three women with her who, I learnt, were from the Battered Wives Refuge. I needed to go through my instructions with Sharon so we went to look for an empty interview room, leaving the others behind in the hall.

The windows of the conference room looked out over the courtyard where the bare branches of a tree made a crazy paving pattern across the grey, December sky. I didn’t like these rooms: everyone passing from the offices and the robing room could see who was in them and although they could not hear what was said, i felt that the body language was sufficient to give those passing a hint of how well, or otherwise, a conference was proceeding. This one was not going well at all. Sharon was reluctant to confirm the events described in her affidavit. I persisted to ask questions about the allegation that Sharon’s boy friend, Colin Fenton, had been waiting for her, near to the Refuge, and had followed her back there most days for the last week.

‘You say here that he took your baby, Angelina, and ran off with her? You followed but couldn’t keep up so you went round to the flat you shared with him?’ I said.

‘You went into the flat to get Angelina, but when you tried to leave he locked the door and you couldn’t get out?’

‘That’s right. I hadn’t any keys to the flat in my purse.’

‘Well, he’d gone on about me coming back so when I said I’d think about it, but I needed a day or two, he let me go.’

‘Anything else happen whilst you were there?’

Sharon looked away, trying to find something else to focus on so that she did not have to look at my face. Eventually she replied, ‘What you suggesting?’

‘I’m not suggesting anything, but you will be asked questions by Colin’s barrister about what happened at your flat.’

There was a pause. Sharon chewed on her lower lip and then said, ‘Nothing happened. Just an argument about me going back.’

I wasn’t sure that Sharon was telling the truth, but I couldn’t take it any further without calling her a liar, so I finished the interview by explaining that I anticipated we would have to wait most of the afternoon before we were called into court. Sharon went to get her three companions and they all returned to the interview room.  They were anxious to give her advice and they were all smoking heavily, so I moved to one corner of the room and began to work on the brief.

As the afternoon wore on and work ceased in all but the closed family court, the place became silent. Daylight faded and, because nobody turned the light on in the room, the five of us were left sitting, waiting in the dim light to be called into court.

I noticed that the conversation of the four women became intermittent and finally ceased.  The silence was almost tangible.  The sound as I turned the pages of the brief was a loud crackle, the click of the lighter they used to light their cigarettes sounded like a tin drum.  The small blue flame and the red glow from the tip of their cigarettes lit part of their faces, throwing the rest into deeper shadow.

I looked at them, curious about their lives.  One of the women was about the same age as me, certainly in her thirties. She was dressed in a style I rather liked, not least because it was so different from the black suits I was compelled to wear.  She looked rather artistic, as if she might be a potter or something similar. Her blue coat was hip length and underneath she wore a floral-print skirt, a white scarf was twisted round her neck. Her hair was a mass of dark curls that looked like they needed combing and her face was small with large dark eyes. On the ring finger of her left hand, instead of a wedding band, she wore a ring with a large green pebble-shaped stone.

I was beginning to find the silence uncomfortable when this woman began to talk in a low voice. There was an urgency in the tone that made me want to listen. I turned  back to the papers on my lap, pretending to work and hiding my interest in the conversation. The woman was talking in a low voice and Anna could only just hear what she was saying.