Life at the Bar – Viewing the Locus in Quo

I only did one other case where the jury were taken for a view of the scene of the crime. The defendants were a couple in their sixties. They were both small, round and grey haired. It would be hard to imagine a more unlikely pair of criminals. They had been charged with handling stolen property – large quantities of cigarettes, hundreds of the sort of packages you can buy duty free. The cigarettes were found in the meat safe of their council flat in north London. They claimed to have no knowledge of them, saying they were hidden there by someone else. They couldn’t say who although the suspicion was that one of their sons was the culprit and he had smuggled them into the country. 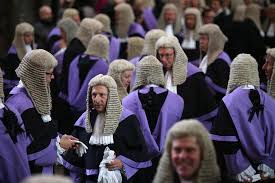 At first blush it seems improbable they were not aware such a large quantity of cigarettes in their two bedroomed flat and that made the location of the meat safe an important issue in the trial. One might have expected the pantry to be in the kitchen but at some stage the flats had been reconfigured and the kitchen moved to the rear. This had resulted in this space being next to the front door. There were photographs of the interior of the flat which showed the boxes of cigarettes in the meat safe and its location. They said they didn’t use it and somebody must have placed the packages there when they were in the living room or bedroom. Perhaps if they had been prepared to say the cigarettes had been put there by a member of the family they might have been believed or at least given the benefit of the doubt. Although they would still have been guilty of handling if they agreed to store the goods, but the jury might just have felt sorry for the position they were in and acquitted them.

The trial lasted a couple of days or so and on the Friday I expected the Judge to do his summing up and sent the jury out, leaving me free to start another case on the following Monday. However when I arrived at court the usher told me the Judge had decided the jury should have the opportunity to see the flat and they were making the necessary arrangements. Eventually, we set off in a convoy to the couple’s home, a coach for the jury, a large black limousine for the Judge, the defendants in a prison van, and I was squashed into a car with the police officer and prosecuting counsel. We got there about lunch time and everybody was given the opportunity to look round the flat. There wasn’t room for us all to get into the property at the same time so we inspected the flat in shifts. When we had finished the Judge looked at his watch and said it was too late to go back. He extended my clients’ bail.

As the jury was lead back to the coach, the limousine took off going north. Back at the Old Bailey, prosecuting counsel and I were discussing whether the ‘view’ was really necessary when we were interrupted by a more senior member of the Bar,

‘Which Judge was it?’

We told him, and he then said, ‘Is there racing at Newmarket? If there is, he was on his way to the races.’